Can a garlic soup conquer colds and flu? 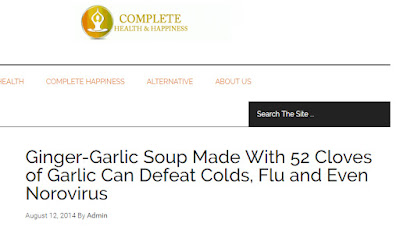 I was fascinated to see a post on Facebook relaying a claim that a soup made with 52 cloves of garlic can 'defeat colds, flu and even norovirus.' Leaving aside the possibility that this is because anyone consuming that much garlic will never get close enough to anyone else to catch anything, it seemed a claim that was worth putting under the Science for Life spotlight.

The claim is from a two-year-old article on a website called Complete Health and Happiness, which as a source, I admit, did rather get my dubiousness sensors tingling. However, I decided to take it at face value and see what the claim was based on.

The website gives as its source a 'recent and significant finding from Washington State University' and helpfully provides a link - but this takes the reader to another so-so looking site called PreventDisease. However, this at least appears to have a link to the research - but it turns out the link just goes to the home page of the respectable Journal of Microbial Chemotherapy. While I struggled to find the precise article, a search on Washington and garlic did throw up a number of papers such as this one which reports the impact of an active chemical from garlic on Scedosporium prolificans in vitro. Most of the work on garlic seems to be in vitro - effectively in a test tube - which makes it impossible to draw any conclusions from it for consuming garlic soup. Lots of substances destroy disease-causing microbes in a test tube (washing up liquid, for example), but that doesn't mean that they will help if you swallow them.

Other papers did cover experiments with mice and humans, though as yet these were very limited and not providing sufficient information to be practical. However, what all the papers have in common is that (like the antibiotics the original website refers to) they are dealing with bacteria. There is nothing whatever in them about viruses. And so, I'm afraid, that there is no evidence that this soup will defeat colds, flu and even norovirus.

Don't get me wrong - garlic is good for you and almost all of us could do to have more vegetables in our diet. But don't think that eating a soup will protect you from infection.
Posted by Brian Clegg at 02:50 1 comment: