Science for Life has over two pages on acupuncture, concluding that it is primarily a placebo-based treatment with no other benefit, but with some evidence that it was effective in the treatment of lower back pain, a view that was, at the time, supported by a Cochrane review and the UK's NICE body, which authorises medical treatments.

However, the evidence has now been through a more thorough analysis, and NICE has changed its guidance to say that acupuncture should not be offered for that remaining area, lower back pain. It seems that the original NICE guidance was subject to a number of flaws and influenced by those with a reason to want acupuncture to be recognised by the NHS.

The weight of evidence now appears to be clear that the benefits of acupuncture, like many other alternative treatments, are solely those to be gained from the placebo effect. See this post by David Colquhoun for details of the problems with the earlier assessment and the new ruling.
Posted by Brian Clegg at 04:12 No comments: 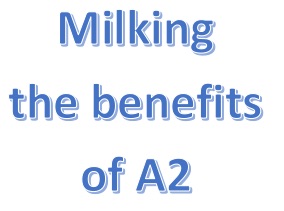 In Science for Life, there's a chance to see the pros and cons of milk in terms of fat, sugar and calcium content. But some years ago there was a case made that a substance in milk called A1 beta casein could be a risk factor for diabetes and coronary heart disease. What made this interesting was that there was a variant of the protein, imaginatively called A2 beta casein, that didn't have the negative risk - and it was possible to produce milk that only had this variant of the protein, called 'A2 milk', which would be healthier for consumers.

Unfortunately, a detailed review by leading science journal Nature found that the diabetes study could not be duplicated with larger, better experiments, while the heart disease study was 'small, short, in an unsuitable animal model and had other design weaknesses' - which is pretty damning even before it fails to be backed up with better experiments. As is often the case with this kind of finding, all too often irresponsibly splashed across the newspapers, the original studies were too small, used bad statistics and simply don't tell us anything useful.

The Nature review calls the A1/A2 hypothesis 'ingenious' - and if it had been backed up it would have resulted in a major transformation of the milk industry. Unfortunately, however, the idea had no credible evidence to support it. Single, small trials are just not enough to do anything more than point out a direction for more in-depth work. In this case, the in-depth work - the stuff we need to listen to - showed that the A2 phenomenon to be unsupported.

Thanks to Professor Etienne van der Poel for bringing this to my attention.